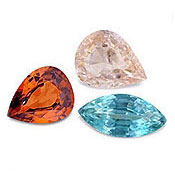 Virtually all blue, red, and colorless zircon is produced by heat treatment. Some orange and yellow is too. This process duplicates heating that can occur naturally in the earth. The effects are usually permanent, but some heat-treated zircons gradually revert to their original color. (Prolonged exposure to intense light increases this possibility.) Heat treatment can also reduce toughness, requiring more careful wear.