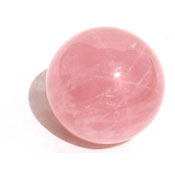 Rose Quartz is occasionally irradiated to improve color. This duplicates a process that can occur naturally in the earth. The treatment’s effects are normally permanent, and it creates no special care requirements for gem owners.