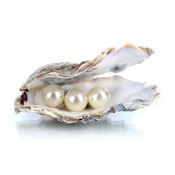 Pearls have a unique set of value factors:

For Akoyas and most freshwater pearls, a standard step is bleaching to lighten color and eliminate dark spots. Akoyas are sometimes tinted by dye or irradiation, and similar methods produce many colors of freshwater pearls. South Sea pearls many be dyed “golden” yellow. The effects of these treatments are usually permanent, and they create no added special care requirements for gem owners.