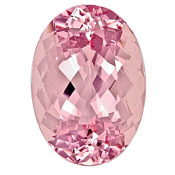 The gem is almost always heat-treated to improve the pink color. The treatment is not detectable. Heat drives off the yellow or orange tinge, leaving a purer and more attractive pink. The resulting color is stable and won’t fade.

Morganite is the pink to orange-pink variety of beryl, a mineral that includes emerald and aquamarine. Beryl is composed of Berylium Aluminium Silicate; chemical formula Be3Al2(SiO3)6.  Morganite’s subtle color is caused by traces of manganese.