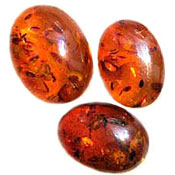 Often treated in one of several ways:

Began with resin from pine trees that lived 10 million to 125 million years ago. Over the epochs since, the resin gradually hardened and changed into a form of natural plastic. More than 1,000 different kinds of insects, flowers, and seeds occur as amber inclusions.  These were caught in the soft resin and encased when it hardened.